My History of Pre-Season

I am 32 years old and I have played football (Gaelic and Soccer) and Rugby throughout my life. So I have been through a lot of preseason training. I remember every single one of them being tuff as hell and very hard to get through.

A great coach once said to “we put in a hard preseason so that game time is easy”. I understood what he meant but it still sucked.

As I said I have gone through a lot of preseason, in a lot of different sport. Each sports has its own type of fitness training. I found  Football (soccer and Gaelic) to be most alike. From what I remember of both (it has been a while since I played either) it was mainly long distance running. Endurance running and sprinting. This was to suit the type of game Gaelic and football was.

You are none stop running for 70-90 minutes in a game, so you have to put in the long yards to condition you body for the coming season.

Now I am a prop in rugby, and I always had a props body. Rugby is made up of so many different types of players it is truly a game for all people. In saying that for the most part the forwards do most of the same training as the backs. Fitness is not the only thing you need to build in preseason. You also need to build you strength in the gym.

The stronger and fitter you are the less chance you have of getting hurt. In past seasons I would go into preseason having done nothing for the past few months. This was a big mistake as I would always end up injuring myself. This would cause me to miss trainings and fall behind.

This all changed with the introduction of s&c coaches (Strength and Conditioning Coaches) the pro game has had them for a long time now. The amateur game is only now starting using them in the past 5/10. They get your team into shape on the field and in the gym and ready for the season and keep them fit and healthy during the season. 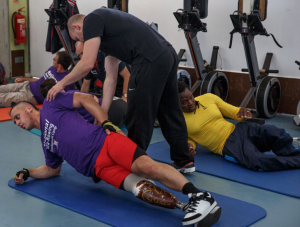 A good s&c coach will be able to see a player that is on the verge of injury and adjust the work load to keep the player moving and recover at the same time. When you get to the regular season have as many fit and healthy players as possible give you team a better chance of winning.

I am 3 weeks into a 6 week preseason It is difficult, but at the end of the day we do a hard preseason so that game time is easy.