With the Premier League kicking off in a couple of weeks, it’s probably time to look at what is going to be the biggest change in recent years. There will be plenty of new signings taking to the field and a few new managers too. It’s always interesting to see how the newly promoted teams fare as well. Although Norwich, Sheffield United and Aston Villa have all featured in the top division not long ago.

What is going to create plenty of headlines is the introduction of the Video Assistant Referee (VAR). People have been crying out for the use of technology for a long time, but some of the big authorities didn’t want to spend the money on it. Eventually, it came in and has been used in different leagues across the world, and at some of the biggest tournaments, including the World Cup last year. The results have been varied, in fact there would be a case to say it has caused, rather than prevented more controversy.

Technology has been successful in rugby, although it can halt momentum, how could this affect free flowing football games? In rugby, the clock is stopped when a decision is being reached, but they haven’t brought this into football, instead they add extra stoppage time. But, what we have seen so far, is they only add an extra few minutes whereas much more time was spent looking at replays, and that time is lost.

What we saw in particular at the World Cup, was the game getting stopped for an incident to get checked, but the fans in the stadium and at home weren’t informed what was going on. Hopefully, they have worked out a better way to do this. 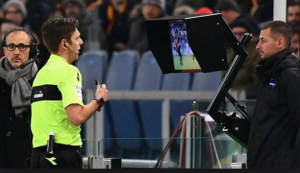 Also, the referee has been seen watching the same incident over and over again on the side of the pitch, struggling to come to a decision. Surely, there are enough people in the VAR booth to watch the replays quickly and give the referee the decision themselves. This hasn’t been done as there was a fear the referee’s job would be undermined, but there is no way the ref can keep a track of everything and you’d think they would appreciate the help and have a bit of pressure taken off.

There can be a lot of positives if VAR can be a success. It can cut out diving and cynical fouls as players won’t be able to get away with it as easily anymore. There might be no more shirt tugging in the box, and it could make for a cleaner game. Ultimately, we want the correct decisions made as too many games in the past have been decided due to incorrect calls. If this can happen without too much disruption to the game, then it will eventually be worth it.

No doubt, at the end of the season, some will be happy with VAR and some will want to see the back of it immediately. This will all be down to how the technology effected their own teams’ results!